Ключевые слова: Employment in Uzbekistan, the level of employment in developed countries, the German experience

Due to the rapid growth of tourism in the world, the tourism industry is becoming one of the most promising areas of employment. According to the International Labor Organization, the world employment rate is declining year by year (Fig. 1).

On the basis of generally accepted laws and regulations on the role and place of tourism in a modern innovative economy, the Government of Uzbekistan recognizes the tourism services sector as an economic sector with significant potential to address employment issues. One of the most pressing tasks in this regard is to identify the current and future needs of tourism enterprises for workers. It is known that in determining the need for staff, special attention should be paid to the consideration of quantitative and qualitative indicators. Thus, some changes in the content and technology of the educational process, analyzing employment indicators by type of activity and the level of skills of the tourism industry, are among the problems that need to be addressed immediately.

In the course of our research, we studied the current state of employment in the field of tourism in the Federal Republic of Germany.

In the Federal Republic of Germany, the tourism services sector is considered to be one of the most important sectors of the economy. According to official data from the German Federal Statistical Office, in 2019 the country's gross domestic product will reach 3435.76 billion. formed the euro. This figure is 0.6 % higher than in 2018. [2]

From the data shown in Diagram 3, it is clear that the bulk of Germany’s gross domestic product falls on the service sector. The share of tourism services is 28.7 %.

One of the fastest growing sectors in the Federal Republic of Germany is tourism. According to statistics, in 2018, 3.7 million people worked in hotels, tour operators and travel agencies, as well as catering establishments, which is 9.2 % of the country's population. Taking into account the multiplicity effect, the share of those engaged in tourism will increase to 12 %.

According to our research, the issue of employment in the tourism industry in Germany has positive trends, as well as a number of unresolved issues. One such problem is staff turnover. That is, more than 50% of those employed in the tourism industry will change their field of activity after 2 years. Our research shows that the factors that determine staff turnover include:

- Low prestige of employment in the service sector, especially in the field of tourism services;

- Lack of opportunities for vertical mobility and higher social stratification;

- The limited number of high-paid managerial positions due to the dominance of enterprises with a small number of employees in the market;

- Seasonal changes in tourist employment related to the seasonality of tourist flows;

- The need for geographical mobility of those engaged in tourism (determined by the seasonality of employment, the need to master foreign languages, the need to study foreign cultures, etc).

As mentioned above, about 3.7 million people work in the field of tourism services in Germany. The following groups are distinguished among the employed:

Currently, Germany is one of the countries with the most dense network of travel agencies in the world. These travel agencies are mainly for small and medium businesses. According to data released by the German National Labor Bureau in 2018, about 1.7 million people were employed in the hotel and restaurant sector of the tourism industry.

During our research, we found that the largest number of jobs are offered by the food industry in Germany today. Also, public catering establishments in Germany are divided into 3 main groups:

- Enterprises focused on income from beverages; 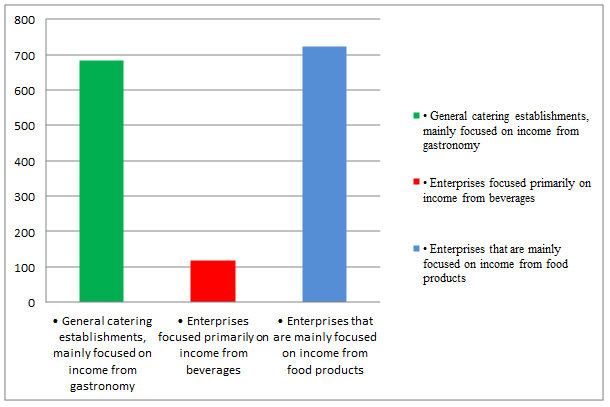 4. Employment rate in the hotel and restaurant business

According to the analytical data of the German Ministry of Economy and Technology, the indicators of the hotel market in Germany are growing. The future growth rate of the market is also forecast as the number of business trips in Europe increases. However, due to economic instability, not all European countries have the same growth rates. However, it is now clear that the hotel sector is the most active in the countries with the strongest economies in the European Union. Undoubtedly, one such country is Germany.

In the course of our research, in addition to analyzing the level of employment in the tourism industry in Germany, we also tried to study the system of training in the country. When we studied the data of the German Chamber of Commerce and Industry on vocational training in tourism in 2018, we found that more than 52 thousand people were trained in the study of food technology and restaurant business in the country, and about 35 thousand in the hotel business.

In our view, based on the above considerations and analysis, we can conclude the following:

- Tourism is one of the most promising industries in Germany. Despite the existence of objective and subjective problems, the number of people engaged in this field is growing.

- The mechanism of training specialists in the field of tourism is well established. Admission to higher education institutions in the country is determined by the real needs of economic entities. As a result, the completion of the training and subsequent employment of this specialist is the responsibility of the same business entity.

From the above considerations, we can conclude that in the context of an innovative economy in the Republic of Uzbekistan, it is necessary to follow the example of developed countries in the development of tourism services and employment. It is also necessary to implement the necessary proposals and recommendations in this regard and achieve high efficiency in increasing employment.