Финансирование:
The article was prepared in accordance with the Research Plan of the Institute of Economy of the Ural Branch of the Russian Academy of Sciences.

Ensuring rural economic development is one of the key problems not only at the regional, national and global levels. National governments, as well as international organizations led by the United Nations (UN), not only constantly monitor the state of rural entrepreneurship, but also develop programs to improve the level of rural entrepreneurial activities, seeing as the main way to ensure the food security for the population.

In the Russian Federation more attention is paid to achieving and maintaining physical and economic accessibility for every citizen of the country of safe food products, which allows better adaptation of conditions for food security. A similar position is reflected in the UN documents on food security and sustainable agriculture, declaring the adaptability of the requirements and conditions of food security for each individual.

The World Food Program developed by UN, focusses and promotes the importance of small and medium-sized agricultural businesses to achieve food security goals. It also suggests that supporting farmers is one of the most effective mechanisms for improving food security at the regional, national and global levels. The food security strategy of the European Commission is built on supporting predominantly small farms, which is common in European countries. The strategy further focusses on providing farmers with almost direct access to the consumer, which requires the development of methods and ways of marketing support for farmers.

The motives of states support to rural entrepreneurs is crucial in understanding the philosophical and practical underpinnings of different support programs [13] (Polbitsyn and Earl, 2019). Rural entrepreneurship is considered not only as one of the effective engines that ensure an increase in the level of national food security, but also as a mean to ensure the sustainable social development of rural regions [14] (Polbitsyn, 2017). Thus, the dual role of rural entrepreneurship is economic and social. Hence, the national and local governments can have a significant impact on the developing rural entrepreneurship, as well as addressing the issues that they may face in fulfilling their two roles.

It is necessary to determine whether state support for entrepreneurs should carry a social burden or whether it should be considered as a support for promising economic entities. Some policies encourage and support entrepreneurship as a form of economic employment, for example, entrepreneurship policies that include the promotion of an entrepreneurial culture, education, and policies aimed at helping "reluctant entrepreneurs", who can be termed as people in the nascent and early stages of starting a business. On the other hand, more traditional support policies for existing businesses are also needed [3] (Galvao et al., 2020). There are many different factors that can influence the level of entrepreneurship in a rural economy, to name a few characteristics of the social, cultural and political context, including policies at the national level regarding market openness, privatization, legal and tax regimes. Any support that entrepreneurs have access to should be aimed at building the entrepreneurial potential in adding value to rural areas.

Much existing research suggests that the local and national governments should develop programs to attract businesses to rural areas, which leads to diversification and improve the welfare of the rural population, hence enhancing economic development. State support for rural entrepreneurship can be classified in the following ways:

• Building the entrepreneurial system of rural areas, for example aimed at influencing the attitudes and motivations of individuals towards entrepreneurship and providing opportunities for acquiring business and managerial skills through education and training;

• Identifying prospective entrepreneurs, for example aimed at attracting new residents with entrepreneurial skills and ambitions, or initiatives aimed at increasing the share of entrepreneurs from different population groups;

• Support for setting up a new businesses;

• Formation of infrastructure that ensures the creation and development of enterprises in rural areas.

Start-ups play an important role in rural entrepreneurship system, and for these start-ups to ensure sustainable development, there is a need for a clear and well-structured support system [7] (Liu and He, 2011). Some of European Union support programs tend to support projects that are more usable for the EU as a whole, rather than for individual rural entrepreneurs [11] (Ozolins et al., 2015). Researchers [18] (Stonkute and Vveinhardt, 2017) concluded that in developed countries, the EU provides support for the development of the necessary agricultural and entrepreneurial competencies, while in developing countries it is limited mainly to financial support. Financial support alone creates additional difficulties for the development of rural entrepreneurship, since it does not add new competencies, but adds new financial obligations.

Support for rural entrepreneurs by providing advice and guidance on various aspects of doing business is also important, and while this guidance exists in, it varies in different contexts. Russian government institutions provide guidance to entrepreneurs around “technical” issues that cover how to draw up a business plan correctly or how to set up financial accounting of an enterprise. However, to get conceptual support on the proper choice of reliable business model, reliable information about customer preferences and the volume of the potential market and its segments, in order to properly choose the target audience, does not exist in practice. The “technical” type of support is available in many countries, however many studies raise the question of the importance of full-fledged advice to rural entrepreneurs, especially beginners, on choosing products to enter the market with, to determine the target audience and prospective share of the market, which are extremely important for entrepreneurs. German researchers, who investigated rural start-ups in Germany, noted the lack of state support in the extremely important decision-making issues on the choice of market and technology in relation to each specific start-up [4] (Huchtemann and Theuvsen, 2018). Kuzniar concluded that the food preferences of young generation is significantly different from the food preferences of the older generation. The demand of the young generation for environmentally friendly products, as well as food products with specific consumer qualities, even in the developed countries remains unsatisfied [6] (Kuzniar et al., 2021). Rural entrepreneurs should focus on this still niche type of demand and develop this promising segment of the food market. Furthermore, the production and sale of niche food should be classified as high-risk types of entrepreneurial activity, which requires qualified support from specialists, whose involvement beginning entrepreneurs cannot afford. Hence, involvement of national governments in providing highly specialized consultations is necessary for aspiring rural entrepreneurs. Researchers [8] (Masiero et al., 2017), found that government institutions that provide support to students to who study entrepreneurship in the form of helping them to become consultants to rural entrepreneurship has proven to be very successful. Such a permanent interaction between universities and the government will raise the level of professional training of entrepreneurs. The cooperation between the state and large trading businesses is essential in advising rural entrepreneurs on the development of the local food market and its development trends [9] (Niemi and Pekkanen, 2016). According to the authors, large retail chains conduct such an analysis for their own purposes, which can serve as the basis for organizing business consulting.

Support for entrepreneurs must be aimed at helping them to diversify their business and start new projects. The diversification of rural entrepreneurs’ business allows them to achieve greater sustainability of their development. Many researchers name this category of ​​support for rural entrepreneurs as the main type of support that allows achieving higher efficiency than other types of state and municipal support.

Some researchers consider the development of rural tourism to be the main type of diversification for rural entrepreneurship. Programs to support and develop rural tourism, aimed not only at getting acquainted with local food, but also with local culture. According to the French researcher [1] (Bessiere, 1998) rural tourism should be considered as the promotion of the cultural heritage of the country, rural tourism organizations attract potential local autistic food products. Furthermore, the development of rural tourism in the UK creates a steady demand for locally produced food, so rural tourism can be considered as an opportunity to promote the products of rural entrepreneurs [17] (Sims, 2009). Sharpley [16] (Sharpley, 2002) defined rural tourism as a promising type of tourism that expands the tourism potential of such a small country as Cyprus. The place and role of rural tourism among all tourist areas in South Korea is highly competitive and the is a need to increase the role of tourism in the economy of rural areas [12] (Park and Yoon, 2009). Although the state support exists in different forms, it needs to go beyond the formation of entrepreneurial infrastructure in rural areas, but to develop an effective infrastructure to create necessary conditions for the development of not only entrepreneurial organizations, but also the entire rural regions. 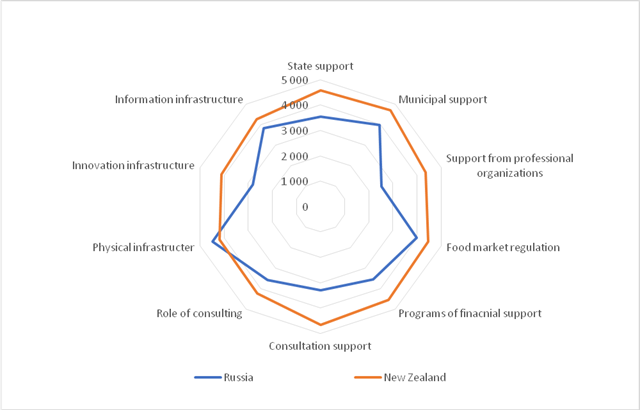 Fig. 1. State support of rural entrepreneurs in Russia and New Zealand. Source: compiled by the authors.

A comparative analysis of the perception of state and municipal support by rural entrepreneurs in the Sverdlovsk region and the Canterbury region of New Zealand leads us to several important conclusions. The instability of the perception of state support by Russian entrepreneurs was one of the key findings. They perceive that they themselves are fully responsible for the performance of their businesses, so they say they must make individual decisions to grow their business. New Zealand farmers see themselves as a part of a state-led entrepreneurial ecosystem, believing that they must follow the rules of this system. Interestingly, in both countries rural entrepreneurs rely on a lot of established relationships and networks in their respective ecosystems.

Russian rural entrepreneurs perceive state support measures as separate measures that are irrelevant to their operations. Therefore, they believe that from the “fusion” one can and should choose only what, in their opinion, is useful and beneficial for their business. The findings illustrate that the state support to New Zealand farmers creates a better perception of state support because the systems and policies are quite transparent, compared to Russian programs. While the state support programs should be interrelated systemically, the perception of Russian entrepreneurs is that they are operating in silos and favoring some entrepreneurs, while in New Zealand the support programs are in-line with the rules and regulations, hence avoiding favoritism.